Weekly Address: American Operations in Iraq
WASHINGTON, DC —In this week’s address, the President detailed why he authorized two operations in Iraq—targeted military strikes to protect Americans serving in Iraq and humanitarian airdrops of food and water to help Iraqi civilians trapped on a mountain by terrorists. The President saluted America’s brave men and women in uniform for protecting our fellow Americans and helping to save the lives of innocent people. The President also made clear that the United States will not be dragged into another war in Iraq – that American combat troops will not return – because there is no American military solution to the larger crisis in Iraq.
Remarks of President Barack Obama
Weekly Address
The White House
August 9, 2014 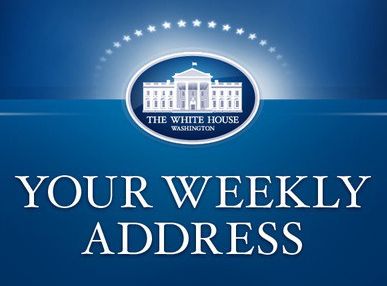 This week, I authorized two operations in Iraq.  First, I directed our military to take action to protect our American diplomats and military advisors serving in the city of Erbil.  In recent days, terrorist forces neared the city.  Thursday night, I made it clear that if they attempted to advance further, our military would respond with targeted strikes.  That’s what we’ve done.  And, if necessary, that’s what we will continue to do.  We have Americans serving across Iraq, including our embassy in Baghdad, and we’ll do whatever is needed to protect our people.
Second, we’ve begun a humanitarian effort to help those Iraqi civilians trapped on that mountain. The terrorists that have taken over parts of Iraq have been especially brutal to religious minorities—rounding up families, executing men, enslaving women, and threatening the systematic destruction of an entire religious community, which would be genocide.
The thousands—perhaps tens of thousands—of Iraqi men, women and children who fled to that mountain were starving and dying of thirst.  The food and water we airdropped will help them survive.  I’ve also approved targeted American airstrikes to help Iraqi forces break the siege and rescue these families.  Earlier this week, one anguished Iraqi in this area cried to the world, “There is no one coming to help.”  Today, America is helping.
The United States cannot and should not intervene every time there’s a crisis in the world.  But when there’s a situation like the one on this mountain—when countless innocent people are facing a massacre, and when we have the ability to help prevent it—the United States can’t just look away. That’s not who we are. We’re Americans.  We act.  We lead.  And that’s what we’re going to do on that mountain.  As one American who wrote to me yesterday said, “it is the right thing to do.”
As Commander-in-Chief, I will not allow the United States to be dragged into fighting another war in Iraq.  American combat troops will not be returning to fight in Iraq, because there’s no American military solution to the larger crisis there.
What we will do is continue our broader strategy in Iraq.  We will protect our citizens.  We will work with the international community to address this humanitarian crisis.  We’ll help prevent these terrorists from having a permanent safe haven from which to attack America.  And we’ll continue to urge Iraqi communities to reconcile, come together and fight back against these terrorists so the people of Iraq have the opportunity for a better future—the opportunity for which so many Americans gave their lives in Iraq in a long and hard war.
Today, we salute our brave men and women in uniform—especially our courageous pilots and crews over Iraq.  They’re protecting our fellow Americans.  They’re helping save the lives of innocent people on a mountain—people who today know that there’s a country called America that cares for them, too, and that is willing to stand up—not just for our own security, but for the dignity and freedom that belongs to all people.